Kim
I am a Child of God, wife, and homeschool Mom to two boys. I believe authenticity is the key to growth and true fellowship, and hope that is reflected here.

Sometimes I just feel like writing, communicating. Thus I'm here after more than a year away. I'm not into blogging to attract viewers anymore, like a silly popularity contest (which is a hold-over from high school days, I guess).

I'm wondering lately why I don't show my true feelings. I mean even the positive ones. I'm not a positive person by nature. I tend to see what someone has done wrong, or what I've done wrong--I'm just as hard on myself as on anyone else. I am afraid of expressing emotions. Why?

I recently asked my Mom to stop speaking negatively about my Dad and grandparents. I told her I felt she had a bitterness issue. Wow, what an explosion of defensiveness and counterattack that set off. I had no idea. It took me years and years to get up the guts to say something. Why? I wish I'd set those boundaries way back when it started at age 14, and maybe my life would have turned out differently--probably so for the mere fact that I would have asserted myself.

So, why did it take me so long to say something? I would rather suffer than make someone else suffer, so I took the suffering of her negative comments on myself rather than be honest about their inappropriateness and effect on me. Someone told me it was better to live in the truth than the lie, but it doesn't feel like that right now. I was also put in a position of her protector, so I guess it would have been very unnatural to do anything to hurt what you've been charged to defend.

Her reaction has shocked me and left a lot of questions. She is currently refusing to speak to me, saying she "doesn't need the censure." It hurts deeply that she has retreated into defensiveness rather than listen to my hurting heart or taking any responsibility for her actions.

And in addition to the defensiveness, there's been the counterattacks. I did not realize our relationship was on such slippery ground. I always thought she was one of my biggest supporters. Now I'm left reeling and wondering what it's all about. The conclusion I come up with, whether correct or not I don't know, is that by my silence all of these years, she has assumed my complicity in her feelings about my Dad. I do believe that she has purposely set out to damage my relationship with him, and finding that after believing herself successful in that endeavor all of these years, she is shocked and appalled to find out that she's been making a fool of herself.

Or, she's just very deeply deceived. Most likely both. I think she's deceived and confused. I have set the "natural order of things" on its head. I've stepped outside my role. I've called her out on a behavior that she has for so long justified, that she can't handle looking at the truth.

One friend said to me, "no wonder you live in a shell; you're too afraid to come out." Hmmm, hadn't thought of that. Emotions were unsafe in my house; feelings off-limits. We did not talk. No one was interested in talking or knowing each other. My Dad was a selfish alcoholic, my Mom co-dependent on him and too busy with keeping a spotless house to be bothered with kids, and my brother and I just coped in our own ways. (Thank God for grandparents.) We were left on our own, particularly during the formative years of our lives when my parents were divorcing and remarrying and too consumed with their own problems. Emotions scare me. I cannot take much emotionalism for too long, or I have a desperate compulsion to run. This has not served my marriage well. I want to be different, but I fear I'm too deeply conditioned otherwise.

Another friend said, "Yeah for you; you set appropriate boundaries!" Yeah for me? I know she's right, but I don't feel like celebrating. There are lots of great things about my Mom, and I want a relationship with her. Am I willing to continue in a relationship if there is no change or repentance? What do you sacrifice for the sake of family? Where do my boundaries lie permanently? Do I expect her to apologize? Agree with me? What will it take for our relationship to be restored? These are answers I do not have. I do not know what's going on in her mind or heart, but I am praying that the veil of deception and root of bitterness of 30 years is being torn to pieces, and trusting that the Holy Spirit is at work in her life. I am praying that we'll both come out of it healthier; I know I will.

A Valentine Video from Tim Hawkins 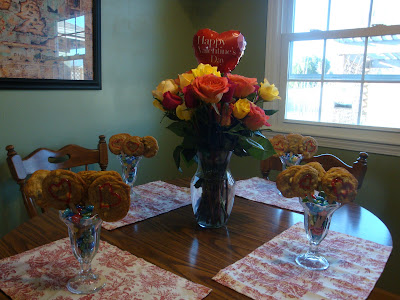 To make these cookie bouquets: I made our favorite chocolate chip cookie recipe and stuck a popsicle stick in each cookie before baking. When they were completely cooled I used decorating gel to make hearts on them, then I filled parfait glasses with beads and stuck the cookies in each one. I love it when things work out! 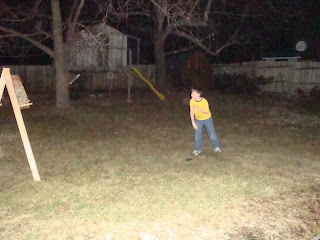 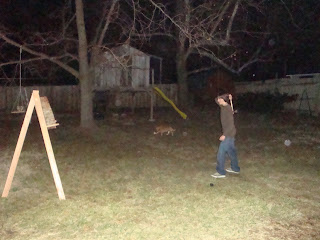 We presented the boys with throwing knives and a tomahawk this evening, along with Michael Pearl's instructional video and a tripod Tracey made to hold a log slice. They're out in the dark throwing as I type. I stayed out as long as is fit for a Mom. Actually, I would love to throw too, but with only two knives and one tomahawk, I figured I'd wait my turn 'til later. I love having boys.

I don't normally get too political, but that may change with this new president. I am deeply concerned about this nomination, and ask you--even if you've never called a Senator before--to take just a moment to do so now. The link will take you to the HSLDA site where you can put in your zip code and find your senator's local number. It will literally take less than 5 minutes of your time, and the future of parental rights is on the line. Here is the information copied from HSLDA:

David Ogden has been nominated by President Barrack Obama to the
position of deputy attorney general of the United States, the second
highest position in the Justice Department. His hearings are scheduled
for today, February 5, 2009.

*Note:* It would be best to call the local offices of your senators in
your state, as phone lines on Capitol Hill are tied up by voters
concerned about pending economic incentive legislation.

Home School Legal Defense Association urges all of its members to
immediately telephone both U.S. senators from your state to oppose the
nomination of David Ogden.

The most important reason to oppose Ogden’s nomination is his belief
that the rules found in the UN Convention on the Rights of the Child
<http://www.hslda.org/elink.asp?id=6077> are already binding on the
United States under the doctrines of international law.

In the Supreme Court case of /Roper v. Simmons/, 543 U.S. 551 (2005),
Ogden argued in a brief that the rules banning the juvenile death
penalty contained in the UN Convention on the Rights of the Child were
customary norms of international law “binding on all states.”

For background information on this doctrine, see Michael Farris’
article, “A Deeper Understanding of the Threat of International Law”
<http://www.hslda.org/elink.asp?id=6078> in the November/December 2007
/Home School Court Report/.

This means that Ogden believes that the legal rules contained in the UN
Convention on the Rights of the Child are already binding on the United
States, even though this treaty has never been sent to the U.S. Senate
for ratification.

Homeschoolers have long understood the dangers of this international
treaty, which contains the core principle that the government may decide
what it believes is best for each child without any proof of wrongdoing
by the child’s parents. Ogden promoted the use of this UN treaty in the
Supreme Court to reach the conclusion that America’s courts have the
power to overrule state law, using international law as their guidepost
for constitutional interpretation. Unfortunately, he was successful in
doing so in the Roper case.

It also means that Ogden is a proven advocate for the position that
international law should be used to interpret the Constitution of the
United States and bind the decisions of our elected officials.

If this weren’t enough, Ogden has a history of representing /Playboy/
and other purveyors of pornography in high-profile legal cases. He also
challenged the legality of using filters on library computers to protect
children from seeing pornography. It would be hard to imagine how Ogden
would faithfully enforce the nation's pornography laws if he is placed
in this position at the Justice Department.

The United States Senate needs to understand right now that the American
public will not countenance the idea of the nation being led by people
who believe that international law trumps American law.

Please call both of your U.S. Senators today to register your opposition
to David Ogden. 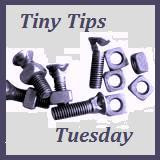 I'm joining Grueling Homeschooling's Tiny Tips Tuesday today. Hers is my #1 go-to blog of the day, so I wracked my brain trying to think of how to join her for the inauguration of Tiny Tips Tuesday. Without further ado, my tiny tip is this: I bought some of those "in" boxes that hang on the wall, one for each child and myself. They place any work they've finished and I need to check in my in box, and I place their schedules and returned work in their in boxes. And my desk remains clutter-free . . . well, maybe pile-free . . . or at least the piles are only of my own making and I can't gripe at anyone else . . .